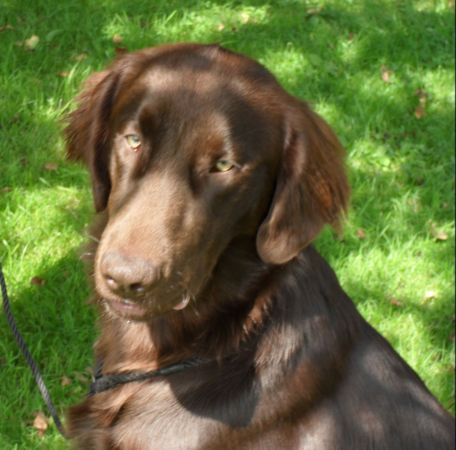 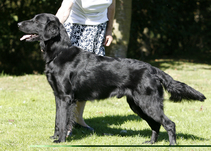 Athos, has matured into a substantial and elegant Flatcoat, being the tallest of our dogs. He sired his first litter when 18 months old and took to stud work as one would expect from a male of his line of descent, coming from some of the great Flatcoats of the past. Atnearly 10 years old he is still siring strong, sizeable litters to suitable bitches.

He qualified for Crufts at his first show, and has done very well being placed best gundog puppy, and progressing to Best Of Breed at Open Shows, and now has his Kennel Club Stud Book number.

A late maturing dog he is easy to live with and train for field work, he took to gundog training like a 'duck to water'. He gets on well with all the other animals on the premises as well as the other stud dogs. He is a joy to have around the place fitting in so easily with our busy home life, welcoming all our many visitors so enthusiastically when he is in the house, but settling back into the kennels when it is his turn to 'live out'. He has never yet produced a liver pup even when mated to a liver bitch, so we suspect he must be a pure black boy. 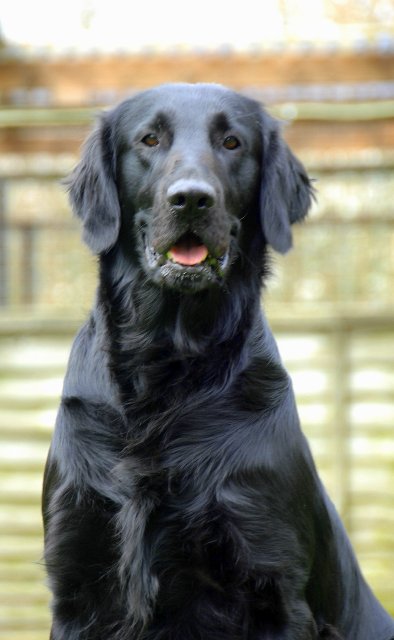 Herbie, a son of Hugo (Hugo My Boy At Torwood) & Lola (Torwood Black Chiffon), is still maturing and looks like becoming a much more elegant version of his father. Qualifying easily for Crufts, but only shown lightly he shows a lot of promise in both showing & working having gained his Stud Book Number at 2+ years. As with all our flatcoats, he is a well balanced person getting on with the older stud dogs and the dachshund stud dogs as well as the other animals on the premises.He like Athos switches between living in the house and kennel with ease.
He mated his first bitch with no fuss and sired a lovely litter of all black pups, but we know he also carries the liver gene as the second litter included some lovely dark liver babies. He is now well established as an easy stud dog to use on difficult, but suitably bred bitches and very popular because of his great working ability and stunning good looks.
Hips 3 : 4 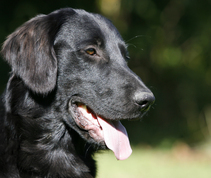 Hugo, our youngest and smallest stud dog at 23 inches, mated his first bitch  with all the aplomb of a veteran, and has continued to produce delightful progeny, fitting into family life with ease.

Qualifying for Crufts every year, with his sound construction and easy going temperament, he will hopefully follow in his illustrious father and grandfather's footsteps, siring puppies well into old age.

A dog who is not oversized but well put together with an outgoing personality, and that beautiful expression, expected, but rarely seen in a Flatcoat. He has the thicke

st, flattest and most waterproof coat of all our stud dogs, proving a great asset when swimming and making him a popular choice among the working fraternity as a sire.

He carries liver from his mother and grandmothers.