The Torwood kennels came into being originally through Flatcoated Retrievers quickly followed by Dachshunds.

We at Torwood strongly believe that in this day and age, although looks and working ability are very desirable commodities it is temperament that must be especially bred for. With the correct temperament for the breed all else will fall into place, and you will have the dog for all occassions, therefore Rachel and I consider temperament our top priority, followed closely by bidability and outstanding personality within the breed standard. 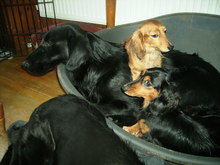 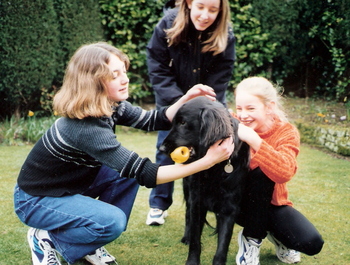 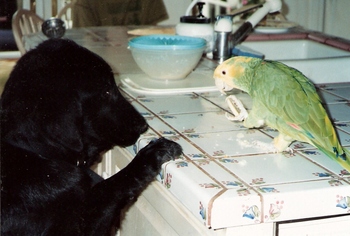 I bought my first Flatcoated Retriever in 1966 as a pet, and look what it has lead to. That is one reason why I do not mind selling pups to people who appear to have no interest in showing or working, you never know where their interests will lead them when they own a dog, especially a flatcoat. I bred two litters, acquired the "Torwood" prefix with my husband and we worked and showed the resulting offspring very successfully.

I was on the Flatcoat Society committee from 1972, and retired when family commitments became too time consuming, still retaining a position on the Show Committee which I had to eventually give up when being part of NEFRA began to take over so much more time. With the launching of the Northern England Flatcoat Retriever Society (NEFRA) I became a founder member and was on the committee till 2010, laterly through being Honorary Working Secretary. After 10 years as Hon Working Sec. and also being on the Judges committee, & News letter committee I felt time was catching up with me and I would like to spend more time with my grandchildren, dogs & the garden so retired and mostly show the Dachshunds now leaving the Flatcoats to Rachel who handles them so well. I was then honored to be asked to become an Honorary Life Member, a position I was pleased to accepted. 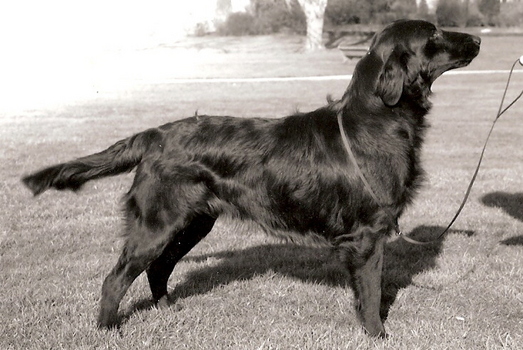 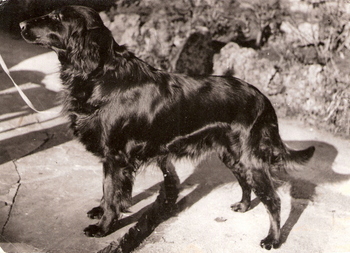 Once we were settled with working and showing the Flatcoats, a smaller house dog was thought to be an asset, and Vicki, a miniature Longhaired Dachshund joined the gang. She soon proved her worth mousing in the stables, but could also hold her own on the settee with the other dogs.

From this foundation stock the Torwood prefix has been breeding quality show, working and companion dogs for the past 40 years. We have bred many dogs successful in disciplines such as agility, flyball, obedience, tracking, fieldwork to the gun and with dummies or just fulfilling the roll of beloved household pet and companion. 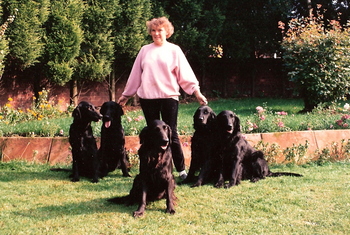 Over the years I have dabbled in many breeds of dog, Chihuahuas, Newfoundlands, Long-haired Weimaraners and Springer Spaniels with West Highland White & Border Terriers the longest lasting of the fun breeds, but I have never ever thought of changing from my original Flatcoats and Dachshunds. 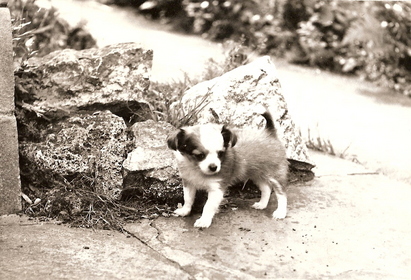 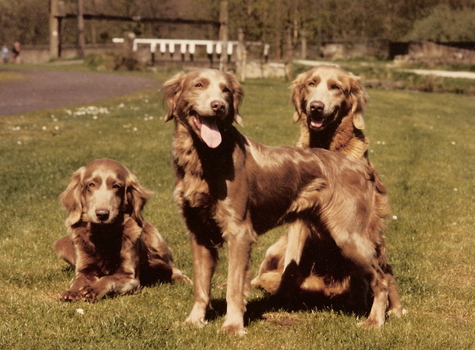 Any dog coming into our household has to fit into the hectic lifestyle we seem to lead, as well as live happily and join in with all the activities of the rest of the gang. 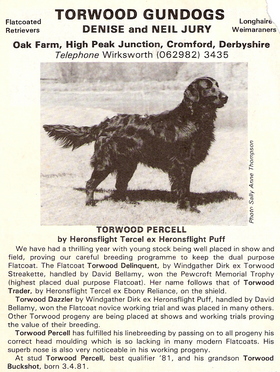 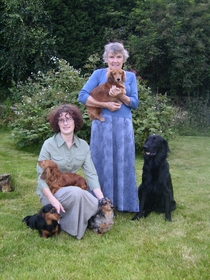 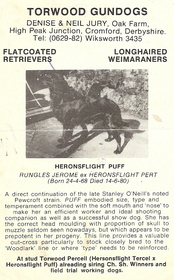 SOME SIGNIFICANT DOGS FROM OUR PEDIGREES

Lad was our liver lout. A fantastic dark liver colour, he was very workman like and a powerful looking dog, having fantastic bone and substance, but not being 'overdone' in any way. He had many 'best puppy' awards as well as 'Best liver' in show at the NEFRA OS and 'Best liver dog' awards. Lad was an easy dog to handle at stud and has produced his beautiful colour as well as his sound breed type and construction, with puppies now showing and working, as well as being fantastic companions, as one would expect from his lineage, being a son of Jim's through Jones and Jack back to Ch Heronsflight Pans Promise, and the old Pewcroft line through Heronsflight Puff. 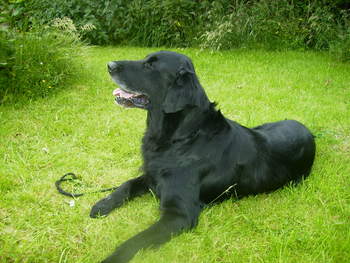 Hilly, was over 11 years old, and still a keen stud dog producing some lovely litters in his later years. He retired from show and gunwork and lived down the road with Flatcoat friends (2 bitches - as well as the humans and the family house rabbit). A successful show dog in his prime, being well placed at Crufts, he was directly descended from Teal of Hawk's nest via Heronsflight Tercel and embodied the mantra of power without lumber as through his zest for life he did not put on weight, and was not a greedy dog. A true gentleman in the breed.

INDIGO JIM at LATHKILL, (Jim), was a stud fee chosen to follow his father Hasweth Inigo Jones. Life progressed in the kennels and the house both showing andworking very succesfully until a keeper friend had an accident with his main working dog (read about Heronsflight Moss's Design at Hasweth) and urgently needed a dog who could take over all the jobs a keepers dog needs to do. I was asked about Jim and off he went to hold the working side of the shoot together. He fitted in their household living with Des and their other bitches, worked well, (gaining a 2nd in the gamekeepers class at Crufts) was used at stud and stayed until Sid, the new son of Des was up and running, when he then returned to Derbyshire and was re-registered to me. As a veteran he was shown and gained 2 RCC's for his excellent movement and used many times at stud because of his natural working ability and temperament. He lived to just 10 years old.
Very young for one of our dogs.

HERONSFLIGHT MOSS'S DESIGN on HASWETH was a dog, not personally owned by me but I owned his father and a brother and sister and he was used extensively at stud passing on to his progeny his superb temperament and working ability. He lived with a keeperand when out on a shoot a young gun shot low and 50+ pellets hit the side of his head he returned on being called straight away. This enabled him to get straight to the vet and thus his life was saved although he did loose an eye but returned as a working dog and a prepotent stud for many years after the incident. His only disability with having only one eye was an inability to judge heights accurately and until he died an occasional pellet would ping out into his feed dish.

DARKDELIGHT HENRY BOY FROM TORWOOD, the father of many superb working dogs. He was not a large dog but reached the required height for showing gaining a 3rd at Crufts. He was an 'outside' dog being happiest in his kennel even in old age and would rather swim than walk if allowed.

PRINCE HENRY OF HASWETH, was sold as a puppy and won a lot of Best Of Breeds and was indeed Best In Show at a Limited Show but on reaching 7y (veteran) he was returned to us and we decided to have his hips scored and they turned out 0:1. Then we decided to enter him in Field Trials where he was placed in Novice & Open stakes. Who says you cannot teach an old dog new tricks?

TORWOOD TRADER, a male from the second litter we bred out of our foundation bitch. He did us proud gaining Field Trial awards and Chalenge Certificates in the Show Ring. His hips were scored clear on the old system and he lived to a venerable old age being still on our 5 generation pedigrees.